GREENEVILLE – Moms and dads beamed with pride in the stands as their children experienced the thrill of receiving their diploma in public again during graduation ceremonies at Tusculum University. 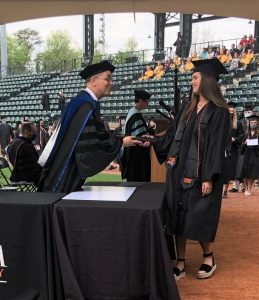 In-person ceremonies returned to Tusculum Saturday, May 8, after two straight graduations were held virtually due to the global coronavirus pandemic. Graduates were ready for the moment as they celebrated this major accomplishment in their lives with a walk to receive their diploma as their families applauded and cheered them from the audience.

More than 230 students from 10 countries and 20 states earned associate, bachelor’s and master’s degrees from Tusculum during three in-person ceremonies in Pioneer Park as well as three virtual ones for those who preferred to participate in that format. Joining the in-person events were some 2020 graduates, who were unable to experience an in-person ceremony last year because of the coronavirus.

Dr. Scott Hummel, Tusculum’s president, commended the graduates for what they had achieved.

“As president, one of my greatest privileges is witnessing how much our students have learned and grown through their Tusculum education,” Dr. Hummel said. “Our students were not just prepared to take exams and complete assignments; they have also been equipped to answer God’s calling in their lives and prepared to fulfill their purpose. A Tusculum education truly transforms students into better citizens, enriches their lives and prepares them for their career. The class of 2021 is Pioneer Ready.”

Trenton Gibson, who is from Murfreesboro, completed his bachelor’s in sport management in three years, earning a 3.96 grade point average. A member of the men’s basketball team, he was named the 2021 South Atlantic Conference Player of the Year and collected CoSIDA Academic All-District honors two straight years for his classwork. He is a member of the Pioneer Student-Athlete Advisory Committee and serves as a Pioneer Peer.

He highlighted the relationships he has built, particularly with members of the athletic department, the College of Education and professors who helped him become a better student. He also spoke lovingly of Nancy Leonard and Roxanna Jaynes for their supportive greetings in the Tusculum cafeteria. In addition, he emphasized the family atmosphere at Tusculum and how he, a basketball player, always enjoyed going to other teams’ games and seeing members of other teams come to his. Another special element of Tusculum is the landscape, he said.

“Those things make Tusculum and the campus a very peaceful spot – a place where I can go outside and read, meditate and just learn,” Gibson said. “Those are things I always took for granted growing up.”

He shared three ideas with his fellow graduates. First, he said one cannot find a substitute for hard work, which is what enabled them to earn their degrees and how they will achieve what they desire in life. He cited Proverbs 14:23, which says, “All hard work leads to profit, but mere talk leads to poverty.”

Second, he told his fellow Pioneers to give their gifts to the world. He said God has bestowed unique gifts on all of them, and he said it is their job to learn, master and love those gifts and then provide them to the world. Third, he told graduates to give God all of the glory and put Him first. When graduates prioritize Him, they will move mountains in their life.

Meredith Barton received this year’s English Senior Key Award and the College of Civic and Liberal Arts’ Student Excellence in Scholarship Award. She was a member of the women’s golf team, wrote one of the plays for this year’s edition of “The 5X10 Plays” and was assistant editor for the most recent edition of The Tusculum Review.

Believing letters hold love and authenticity, Meredith Barton wrote one for her fellow graduates. The Brevard, North Carolina, resident noted that graduates have likely pondered their futures, potentially with uneasiness and uncertainty.

She said these moments present opportunities for growth but require that graduates allow themselves to feel vulnerable. Barton noted that author Brene Brown discovered people who experienced and lived in wholeheartedness were vulnerable and showed courage, compassion and connection. Even though they were imperfect, they believed they deserved good things and put good things back out into the world.

Barton, who graduated with a bachelor’s degree in English with a concentration in communication and public relations, encouraged graduates to reflect on moments that left them in awe. She said one element was part of all of them.

Avonlea Knode, who is from Summerville, South Carolina, earned a bachelor’s degree in business management and will return to Tusculum for a Master of Business Administration. She served as a resident assistance and helped run the Bonner Leader Program through the Center for Civic Advancement. She was a senior Honor Key Award winner for the College of Business.

her remarks, she said motivation is not enough for someone to achieve success. Happiness and freedom are the keys. She recalled a couple of moments in her life that taught her how to live – heading toward a sunset in the water in South Carolina and running outside in the rain with her dog and then falling into the dirt next to him.

“For me the moments in which I find myself knowing who I am and what I want best are the simplest ones or even the silliest ones, the ones we always want but rarely have,” Knode said.

She also made a conclusion about how she wants to lead her life.

“I finally decided I didn’t want the life of waking up going to work waiting to live every weekend and then not actually doing anything on those weekends,” Knode said. “What life is that? Each and every one of us is capable of living a vibrant life once we just make the decision to live fully and endlessly.

“Finding my beliefs and thoughts on this world is one of the most amazing things I have done in my life, and I hope you all find it as well. The lives we lead are short and can end at any moment with no warning. I want to live a life without regrets. I encourage you to identify your Everest and do all you can to conquer it.”

In addition to awarding degrees, Dr. Hummel presented the President’s Award. This award goes to a graduating senior who has contributed the most to the university’s success and has been the most outstanding achiever in academics, athletics, campus leadership and personality during that student’s four years. This year, Tusculum honored two individuals – Jalia Arnwine, who received a bachelor’s degree in criminal justice, and Jackson Cauthen, who graduated with a bachelor’s degree in nursing.

Dr. Hummel cited Arnwine’s academic excellence, being one of the leading scorers on the women’s basketball team and leading the creation of the Black Student Union and serving as its co-president. He also extolled Cauthen’s academic performance, prowess on the football field, service as a football team captain and involvement in the Fellowship of Christian Athletes, including leading a men’s Bible study group. He said the two have exhibited a long history of civic engagement and their leadership is recognized by their coaches, faculty members and peers.

“It is my great honor to celebrate this important milestone with all of today’s graduates,” she said. “This is a monumental steppingstone in your lives and the lives of everyone who has supported you on your journey. It is also monumental in that we are able to have these commencement ceremonies in person. We are extremely proud of all of you, and I wish you the very best in everything that is to come.”